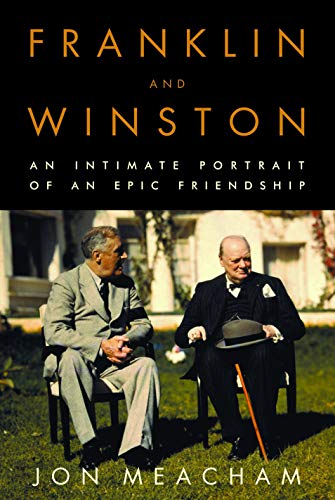 Meacham, managing editor of (editor, ), delivers an eloquent, well-researched account of one of the 20th century's most vital friendships: that between FDR and Winston Churchill. Both men were privileged sons of wealth, and both had forebears (in Churchill's case, Leonard Jerome) prominent in New York society during the 19th century. Both enjoyed cocktails and a smoke. And both were committed to the Anglo-American alliance. Indeed, Roosevelt and Churchill each believed firmly that the "English-speaking peoples" represented the civilized world's first, best hope to counter and conquer the barbarism of the Axis. Meacham uses previously untapped archives and has interviewed surviving Roosevelt and Churchill staffers present at the great men's meetings in Washington, Hyde Park, Casablanca and Tehran. Thus he has considerable new ground to break, new anecdotes to offer and prescient observations to make. Throughout, Meacham highlights Roosevelt's and Churchill's shared backgrounds as sons of the ruling elite, their genuine, gregarious friendship, and their common worldview during staggeringly troubled times. To meet with Roosevelt, Churchill recalled years later, "with all his buoyant sparkle, his iridescence," was like "opening a bottle of champagne"—a bottle from which the tippling Churchill desperately needed a good long pull through 1940 and '41, as the Nazis savaged Europe and tortured British civilians with air attacks. One comes away from this account convinced of the "Great Personality" theory of history and gratified that Roosevelt and Churchill possessed the character that they did and came to power at a time when no other partnership would do.