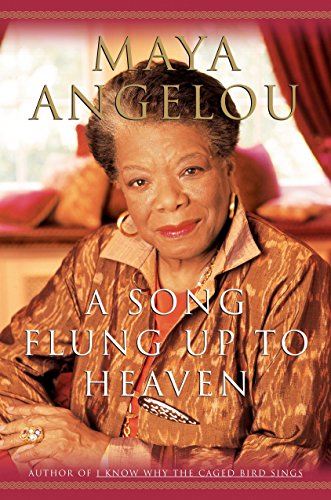 A SONG FLUNG UP TO HEAVEN

Angelou left Ghana in 1964 to join Malcolm X in building the Organization of African-American Unity, and, in 1968, prepared to leave New York City to work with Martin Luther King Jr. Two calamitous events—the assassinations of both—frame this brief memoir, a sort of coda to Angelou's monumental serial autobiographies. The ghost of one leader and the foreshadowing of the death of the other lend depth to wanderings that in other hands would be mere meanderings. The four-year period she writes about here is filled with information about which readers might care little—but the mere fact that it's written by this icon makes it important. At times, the name-dropping overwhelms ("Abbey Lincoln and Max Roach had moved from Columbus Avenue to Central Park West."), but her gracious spirit prevails. For those unfamiliar with it, Angelou's own story is deftly sketched. She recollects her attachment to her family—mother, brother, son—and her detachment from her husband with fondness and wryness, and briefly spotlights her various jobs, from polling housewives in Watts, Calif., to nightclub singing in Hawaii. Though satisfying, this sometimes flat account lacks the spiritual tone of Angelou's essays, the openness of her poetry and the drama of her other autobiographies. Soon after her return to the U.S. in the late 1960s, Angelou found herself with "no room in which I could consider my present and my past." This period of her life ended as Angelou embarked on her classic ; the rest is literary history.