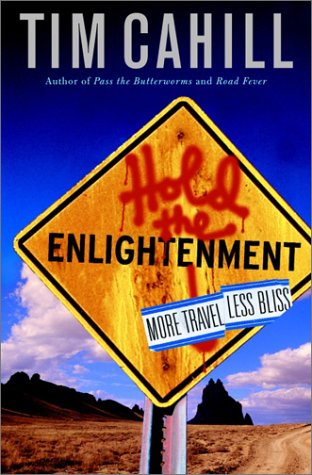 Organized in the "chaotic logic of a pinball in urgent play," this collection takes its reader from a yoga retreat in Jamaica to the mountains bordering Iraq as smoothly as it transitions between moments of sheer hilarity and utter poignancy. In essence, what Cahill () has done is display various snapshots of his own life and travels, allowing the reader to experience it as he does—one episode at a time. In "The Terrible Land," Cahill travels to Hanford, Wash., on a stretch of the Columbia River that is pristine and, at the same time, the largest toxic waste dump in the Western Hemisphere. In "Evilfish," Cahill responds to an article in the in which the much-loved, friendly dolphin is revealed to be a joy-killer. With his trademark clarity and wit, Cahill manages to take the article's depiction of the animal with a permanent smile one step farther, citing studies of dolphin gang-rape and infanticide while poking fun at a society that views dolphins as Flipper. Cahill takes armchair travelers on a search for the elusive Caspian Tiger in the villages of southeastern Turkey and on a midnight trek through an Australian forest as a "Wiley Platypus Hunter." He recounts his first "Bug Scream," the reaction to a half-pound centipede dropping on his chest in the midst of the Congo Basin, and recalls the generosity of the people of his own small town in Montana. This is a collection with something for everyone; each story, in its own way, manages to raise the consciousness of the reader and reveals that the author, whether he wishes to admit it or not, is absolutely on the path to enlightenment.