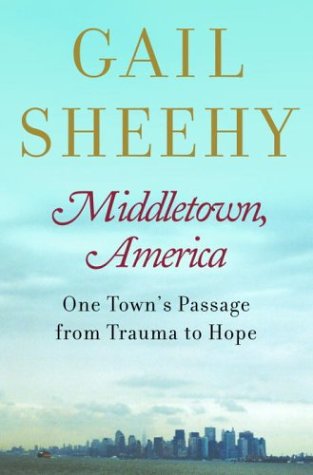 MIDDLETOWN, AMERICA: One Town's Passage from Trauma to Hope

With nearly 50 victims, the commuter hamlet of Middletown, N.J., and its environs suffered the "largest concentrated death toll" on September 11 of anyplace in America. A "town with no middle," Middletown consists of affluent financiers and working-class police officers and firefighters—two groups that were hit particularly hard in the attacks. Bestselling author Sheehy (; ; etc.), who spent almost two years observing the residents' reactions to the staggering loss, explores how this high-end suburb, for which the closest thing to a social fabric was a ferocious sensitivity to social status, dealt with the tragedy. Sheehy ignores governmental machinations in order to describe the welter of emotions ordinary Americans experienced. The enemy of cliché is detail—and Sheehy's months in the town yield subtle, detailed portraits that confound easy images of "strength" or "denial" (although those are also present). Sheehy implicitly critiques modern American life: any salutary community bonding suggests a prior lack of cohesion, just as the emphasis on financial assistance tends to obscure more fundamental psychological needs. In a community filled with "prefeminist" housewives, "loss of self" became a substantial problem—who am I, if not this or that victim's spouse? Fortunately, in addition to the considerable generosity the town evinced, survivors were able to form an "intentional family" united by grief. One sometimes hears that everyone "knows" what happened on September 11. This admirable book tells precisely the stories we could stand to hear more about. 8 pages of photos not seen by .