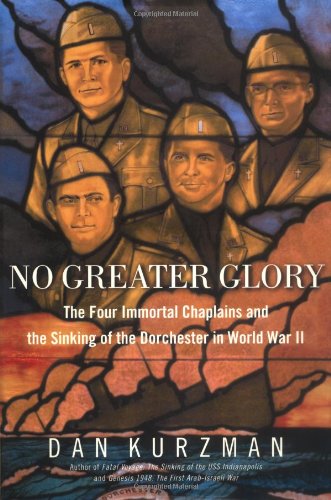 NO GREATER GLORY: The Four Immortal Chaplains and the Sinking of the Dorchester in WWII

The U.S. Army Transportation Service troopship was torpedoed in the North Atlantic, 100 miles south of Greenland, on the night of February 3, 1943. As a former luxury liner, the ship went down quickly. Of the 900 passengers and crew, 597 were military personnel, and four of those men were the ship's chaplains—Methodist senior chaplain George Lansing Fox, rabbi Alexander Goode, Dutch Reformed minister Clark V. Poling and John P. Washington, a Roman Catholic priest. Each chaplain distributed life vests as the ship went down and then gave up their own when supply ran out. (There were approximately 200 survivors.) Former correspondent Kurzman ( ) follows the men from their enlistments to that fateful night, detailing their families and travails along the way. The result is the fullest reckoning yet for the men who have become known as "The Four Immortal Chaplains," who have previously been commemorated by the U.S. Postal Service, with a stamp issued in their honor.