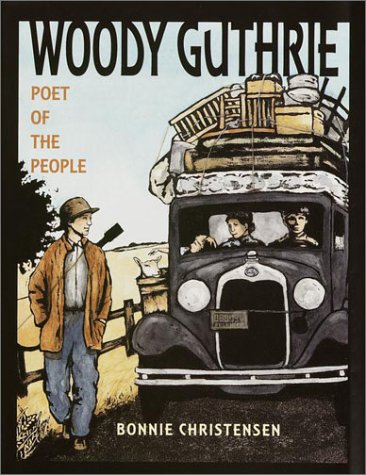 WOODY GUTHRIE: Poet of the People

Seemingly tapping into the tone of Guthrie's own lyrics, Christensen's () folksy, sometimes plaintive narrative offers a resonant profile of this songwriter's life and work. Born in Oklahoma in 1912 to parents who were both fond of singing, Guthrie throughout his childhood "heard the songs that swept across the prairie—wind and rain songs, thunder rumbling, lightning crackling songs." The author incorporates snippets of Guthrie's lyrics as she follows his peripatetic path, first to west Texas where he learned to play the guitar and gravitated toward "old-time country music that got people laughing and forgetting their worries" and later to California. Christensen deftly reveals how Guthrie's songwriting was propelled by the issues of his era; he sang his "Dust Bowl ballads" on the radio in Los Angeles and, moved by the plight of unemployed migrant farm workers, coal miners and factory hands, he "became their voice, and songs were his way of speaking." His articulate and far-ranging voice rings clearly through these pages, which feature the full lyrics to "This Land Is Your Land" sprawled in oversize hand lettering across the top of each spread. Reminiscent of woodcuts, the mixed-media, earth-toned illustrations creatively evoke the period and the variegated landscapes of this gifted performer's life. All ages.