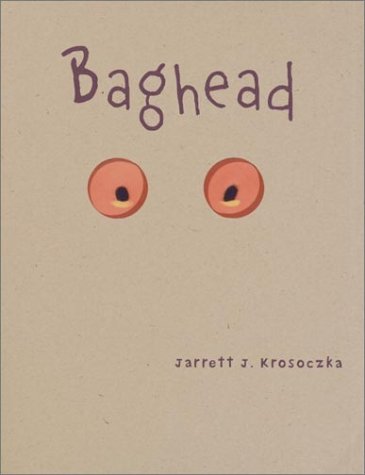 When Josh insists on wearing a brown paper bag over his head all day, the grownups around him go a bit crazy. "How do you plan to play like ?" asks his soccer coach, a demand that Krosoczka () renders in imposing handwritten letters. But throughout the day, and in the face of a panoply of authority figures, Josh's resolve not to be unmasked remains as immutable as the three-hole (two for the eyes, one for the mouth) expression on his bag face. The hero's successful acts of insubordination (he makes three goals in soccer, for instance) attest to Krosoczka's sympathy for his audience, who will readily identify with Josh. The saturated, deliberate brushstrokes make the most of Josh's tenaciousness, and the hero's peppy stride and confident stance transforms the paper bag's goofiness into a kind of jaunty cheek. Just when readers may begin to think that Josh could sustain his baghead façade indefinitely, his little sister pops the one question no adult has bothered to ask: "Why are you wearing a bag, Josh?" For the first time, Josh reveals himself, along with the answer: a do-it-yourself haircut. That same compassionate sister brings about the happy ending in the form of a spiky new 'do (thanks to her pink mega-hold styling gel). Ages 4-7.