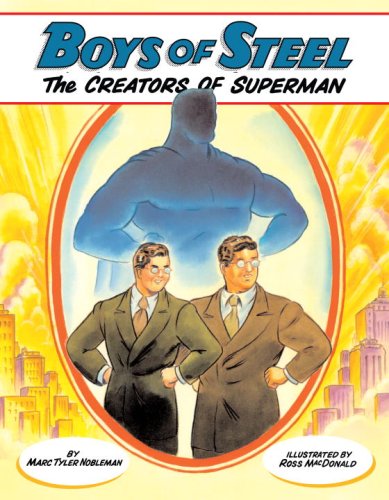 Boys of Steel: The Creators of Superman

Catering to comics junkies, this vibrant and well-researched picture book biography introduces the youthful inventors of Superman, who this year celebrates his 70th anniversary. Writer Jerry Siegel and illustrator Joe Shuster are mild-mannered everymen whose reflective glasses conceal their eyes—and their potential. In a crowded high school hallway, Jerry wishes he could be with his “friends,” and a turn of the page reveals Tarzan, Flash Gordon and Buck Rogers. Joe, “lousy at sports and mousy around girls,” draws sci-fi heroes with a passion. In 1934, when both are 20, Jerry dreams up the Superman concept and Joe draws prototypes labeled “S” for “ 'super.' And for 'Siegel' and 'Shuster.' ” In June 1938, their creation launches in . Nobleman details this achievement with a zest amplified by MacDonald's ( ) punchy illustrations, done in a classic litho palette of brassy gold, antique blue and fireplug red. MacDonald's Depression-era vignettes picture Siegel pondering his superhero's powers and the friends casting a single, caped shadow. A cautionary afterword chronicles their protracted financial struggles with DC Comics—when Siegel and Shuster sold their first Superman story, they also sold all rights to the character, for $130. Ages 10–up.