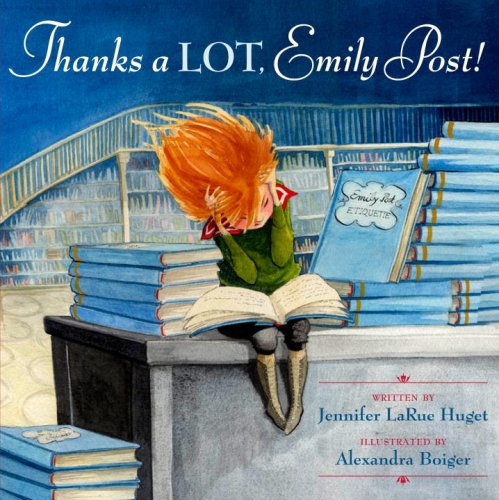 Huget's debut shows how mayhem can result when anything is taken to extremes, as four antsy children and their frazzled mother alternately come to loathe the blue Emily Post etiquette book Mother buys. “Suddenly it was Emily Post this, Emily Post that. We weren't allowed to slump in our chairs. We had to keep our hands to ourselves,” narrates a frustrated son. Boiger's ( ) detailed vignettes show the early 20th-century family trying unsuccessfully to adapt—the siblings end up tied to their chairs in one illustration. Ghosts of the fictional characters Post used to illustrate her points (Mrs. Worldly, Mrs. Toplofty, the Wellborns) make several appearances, in shadowy blue-gray hues, trying to assist the unwilling children and revealing that not even a young Emily Post was above reproach (she once fed a shattered tea set to her goldfish). When the children turn the tables and use Best Society rules to annoy their mother, she sends the ghosts and the blue book packing. Despite the sometimes inconsistent renderings of Mother's face, the inviting watercolors and slapstick comedy will keep readers turning the pages. Ages 4–8.