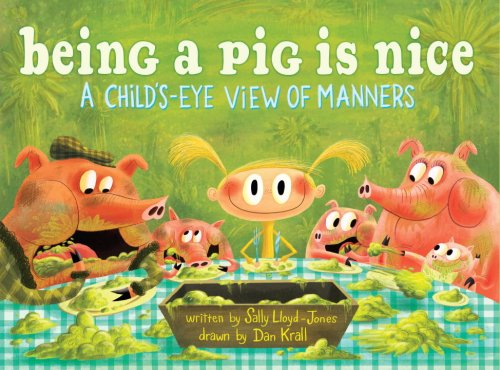 Being a Pig Is Nice: A Child's-Eye View of Manners

Krall's florid, goofily ebullient work in his children's book debut should ring a bell with Cartoon Network fans—he's worked on several hits, including and . Here, he and Lloyd-Jones ( ) follow a pigtailed heroine as she muses on manners, cultural relativism and the benefits of being any species other than human. “When you're a MONKEY, eating with a knife and fork isn't allowed. It's Against The Rules,” she notes, as Krall shows a large monkey family's banana-eating bacchanal, with the hairy parents scowling at their prim, utensil-wielding daughter. “Misbehaving” animals earn hilariously screwy lectures: “You know the drill, young lady: sit up crooked, elbows in my face, fingers up your nose.” Of course there's always a drawback to being each animal: owls, for instance “have to eat mice for breakfast and then throw up their fur and bones,” a reality check that Krall portrays in a gleefully gross manner. Although the book skids to an end, the preceding pages are so high-spirited that readers will be forgiving. Ages 4–8.