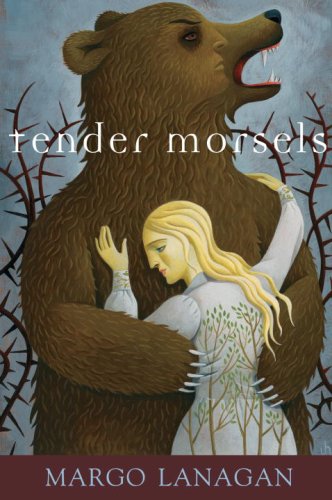 In her extraordinary and often dark first novel, award-winning story writer Lanagan ( ) creates two worlds: the first a preindustrial village that might have sprung from a Brueghel canvas, a place of victims and victimizers; the second a personal heaven granted to Liga Longfield, who has survived her father's molestations and a gang rape but, with one baby and pregnant again, cannot risk any further pain. As she raises her two daughters, placid Branza and fiery Urdda, she discovers that her universe is permeable: a dwarf or “littlee man,” in Lanagan's characteristically knotted parlance, slips in and out of her world in search of treasure; and a good-hearted youth also enters, magically transformed into a bear in the process. A less kind man-bear follows, and then a teenage Urdda, avid for a richer life with the “vivid people,” figures out how to pass through the border, too. Writing in thick, clotted prose that holds the reader to a slow pace, Lanagan explores the savage and the gentlest sides of human nature, and how they coexist. With suggestions of bestiality and sodomy, the novel demands maturity—but the challenging text will attract only an ambitious audience anyway. Ages 14–up.