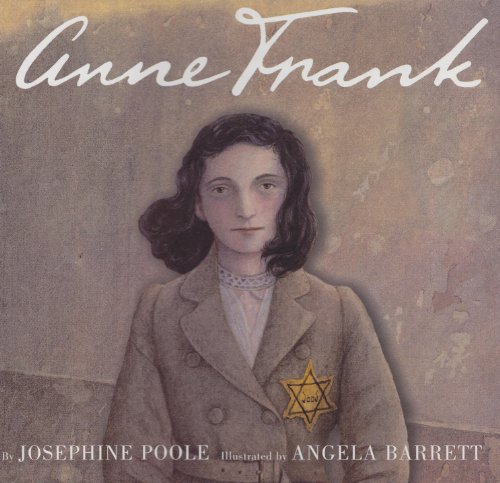 Poole and Barrett's ( ) third collaboration tells of Anne Frank's childhood up through the moment her family's hideout is raided by the Nazis, and serves as a kind of introduction to the heroine's diary: "The story of Anne Frank begins with an ordinary little girl, someone you might sit next to in class." Compassionately, calmly, Poole shades in the circumstances that led up to the Holocaust, describing the poverty of the Weimar Republic and Hitler's hate campaign against the Jews: "He accused the Jews of grabbing the best jobs.... And it wasn't fair, because Germans were special—the finest race in the world!" Anne's father finds work in the Netherlands, but the Germans raid there, too. Barrett's gouache paintings begin with a sunny scene of Anne's nursery, and gradually lose their color as Nazism overtakes Europe; by the end of the story, the pictures of the family in their hiding place have faded to dark grays, browns and somber greens. Yet the illustrations maintain a certain softness; one last close-up shows Anne's face, frightened but controlled, as the SS officers take her away. This visual approach keeps youngsters at a safe distance, along with a focus on Miep, Mr. Frank's secretary, who saves Anne's diary and returns it to Mr. Frank after the war: "Anne Frank was no more than a girl, and her short life had come to an end. But her story was just beginning." The green leaves of spring unfurl outside the window as Miep hands him the bright red diary—offering readers a picture of redemption and hope. Ages 8-up.