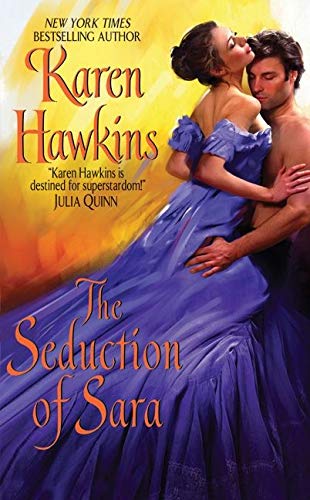 THE SEDUCTION OF SARA

The hunter becomes the hunted when a society miss decides to seduce her seducer in this lively installment in Hawkins's Regency-era series (). Headstrong and willful, Lady Sara Carrington is banished to Bath by her brothers when her escapades begin to border on the scandalous. To escape her brothers' high-handed ways, she hatches a scheme to capture a malleable husband. Her prime candidate is Nicholas Montrose, the Earl of Bridgeton and a notorious rake who just returned from the continent after being expelled from England. Although he refuses to marry because of his scarred past and uncertain future, Nick is more than willing to teach Sara the art of seduction. It isn't until his apt pupil begins using her newfound skills to steal his own heart, however, that he realizes the danger of the game he's playing. Hawkins (aka Kim Bennet) sprinkles her narrative with delightful supporting characters and charming secondary romances—including one between a dubious French aristocrat and Sara's aunt. Several scenes involving Sara and her thwarted suitors add humor to the mix, and the promise of a fourth romance between Sara's brother, Anthony, and her best friend and fellow schemer, Anna Thraxton, will keep readers coming back for more.