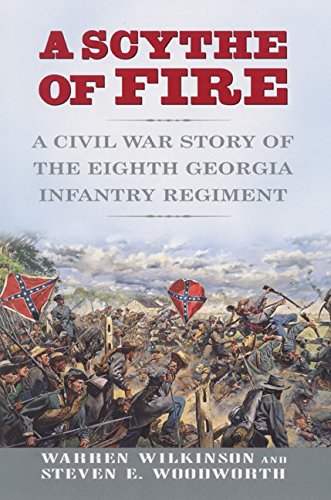 A SCYTHE OF FIRE: A Civil War Story of the Eighth Georgia Infantry Regiment

The Eighth Georgia Infantry was a typical volunteer unit comprising men from a number of Georgia counties. Wilkinson () died in 1995 before completing this book, which was finished by Civil War historian Woodworth (). The text traces the Eighth Georgia's evolution from a regiment of raw recruits to a tattered remnant of 100 men who surrendered at Appomattox in 1865. The Eighth first saw combat at Bull Run, where its loss of more than 200 ranked it first in that terrible engagement. Woodworth follows the regiment through its remaining term of service, including the Seven Days' Battles, Second Bull Run, Antietam, Fredericksburg, Gettysburg, Knoxville and the 1864–1865 battles that decided the fate of the Confederacy. Using a plethora of diaries, letters, newspaper articles and postwar reminiscences, Woodworth brings an intensely human face to this unit, detailing the casualties and human suffering the Civil War entailed. A too-brief final chapter covers the last year of the war, but most buffs will be satisfied. 8-page photo insert not seen by