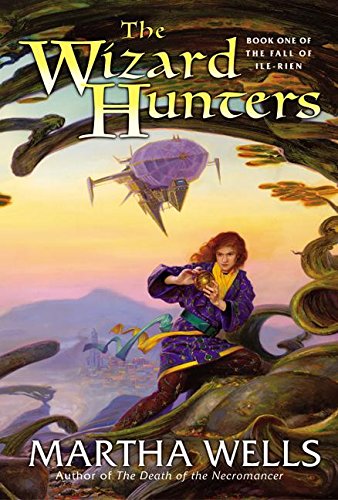 THE WIZARD HUNTERS: Book One of the Fall of Ile-Rien

"It was nine o'clock at night and Tremaine was trying to find a way to kill herself that would bring in a verdict of natural causes in court, when someone banged on the door." So begins Nebula-nominee Wells's entrancing return to the world of (1998), and if the rest of the book doesn't quite fulfill the promise of that first sentence, it comes very, very close. On Ile-Rien, a world besieged by the mysterious and well-nigh invulnerable Gardier, Tremaine is recruited to help devise a spell that can break through the Gardier airships' impregnable shields. Yet instead of creating a weapon, the spell transports Tremaine and a small band of cohorts to another world with a secret Gardier base, giving them a chance to spy on the enemy of which they know so little. Tremaine makes an engaging and resourceful heroine, if a reluctant one, while her well-drawn fellow adventurers add plenty of human interest. Where the book falters is in the repetitive action, as various characters fall into the hands of the Gardier, then escape, return to rescue comrades left behind or to attack, get recaptured and escape again and again. Wells's ability to keep the reader wondering what will happen next, however, more than compensates for this relatively minor flaw.