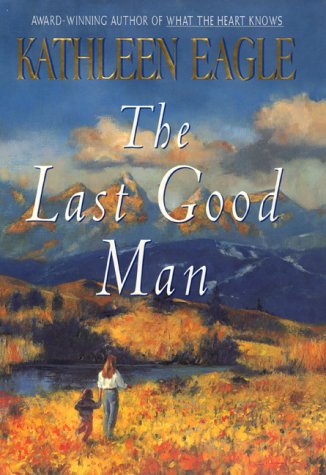 The familiar ""will she or won't she"" theme is given a serious twist in Eagle's latest (after What The Heart Knows), combining a solid western/romance plot with more complex, contemporary issues. Salt of the earth Clay Keogh, rancher and farmer, has heard the smalltown whispers: gorgeous Savannah Stephens is back in Sunbonnet, Wyo. The famous model is surrounded by mystery, especially because her small daughter looks exactly like Savannah's first love, the romantic and dangerous Indian activist Kole Catches Crow. Clay, Savannah's childhood friend and Kole's half-brother, has always been in the shadow of his romantic and dangerous sibling, and he's also always carried a torch for Savannah. Desperate to break through her serious depression, he offers her a marriage of security. Though Savannah accepts those terms, she slowly realizes that she wants to forge a real marriage with Clay. That is, if she can deal with his ex-wife, Roxie, and her kids and Clay's tough mother, Patty. Savannah has happiness within her reach, but she harbors a painful secret that she's afraid to admit to her adoring husband, and he, in turn, remains afraid that she'll decide to take up her old life. Eagle draws her main characters with substance and her supporting characters with verve. Savannah's daughter, Claudia, is a charmer who plays a surprising role in the narrative, and while Kole is something of a red herring, he's an effective story facilitator. (Aug.) CURTAIN CREEK FARM Nance Van Winckel. Persea/Braziller, $22 ISBN 0-89255-250-6 ~ An anarchist commune in Washington State, founded in the '60s, survived the disenchantments of the next decades, but its idealistic inhabitants are shaken when one of their longtime members, Lila, dies of cancer at age 50. Poet and fiction writer Van Winckel's (After a Spell; Quake) collection of eight interconnected stories tenderly and honestly describes the joys, compromises, dreams and hard realities of the farm, ""a world away from the world."" In truth, a generation after the farm's inception, the collective collides with the outside world more often than not. Lila's herpetologist son, Russell, is seriously enamored of Lila's friend, Geneva, in ""The Lap of Luxury."" In ""Making Headway,"" Roxanne gives Geneva deep-tissue massages, and knows that her back problems stem from being ""spooked by love""; that is, she's afraid to accept Russell's devotion, because he's 15 years her junior. Roxanne's husband is long gone, prompting advances from Frito, a nomadic Web designer. The children of the community poignantly respond to Lila's death by organizing mock funerals for kittens, possums and other animals, even staging one for a four-year-old playmate (""The Land of Anarchy""). This ceremony is interrupted by the appearance of a cougar, one moment of many where Van Winckel's canny symbolism satisfyingly vexes the distinction between nature and culture. The children, meanwhile, demarcate the thin line between the commune's stubbornly radical vision and its inescapable participation in various social constructs. In the final story, ""Treat Me Nice,"" this division is beautifully transcended. Francine, a nurse, encounters an Elvis imitator with a mysterious injury, whom she marries on the farm. At the wedding, 12 other Elvis imitators, singing ""All Shook Up,"" parachute to earth from a plane high above. The narrative is chock-full of surprising images like this one, as Van Winckel merges popular culture and utopian lifestyles with rosy, generous vision. (Aug.)
close
Details