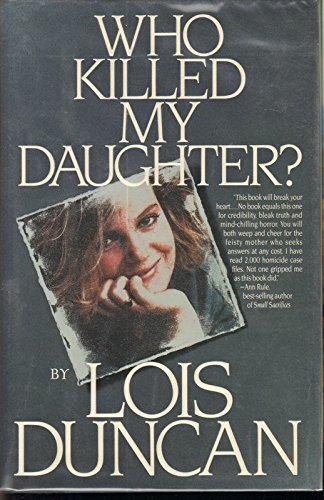 Who Killed My Daughter?

On July 16, 1989, Kaitlyn Arquette, a part-time college student and the author's daughter, was shot as she drove home in Albuquerque, N.M. She died the next day. The police department initially suspected that she had been the victim of a random shooting. The police ineptly handled developments in the case, charges Duncan, not because of incompetence, but due to laziness and stubborn adherence to the theory of the moment. Duncan's appeals to the FBI for help went unheeded. She turned to psychics, who offered leads, and to a private detective, who was ineffectual. Gradually it surfaced that the naive Kait had become involved through her live-in Southeast Asian boyfriend with a Vietnamese gang of drug smugglers who also dealt in insurance fraud, a gang that probably used Mexican Americans as hit men. The case is still unsolved, according to the author, and there are clues galore to be pursued. Readers critical of either Duncan's contacts with paranormals or her talking to God and to her dead daughter may be put off by the book, but many will be sympathetic to this mother's plight. The book could well be a top seller. Duncan, author of 39 young adult suspense novels, won the 1991 Margaret A. Edwards Award for lifetime achievement, jointly sponsored by School Library Journal and the Young Adult Library Services Association. Photos not seen by PW. Time-Life Book Digest condensation selection. (June)
close
Details