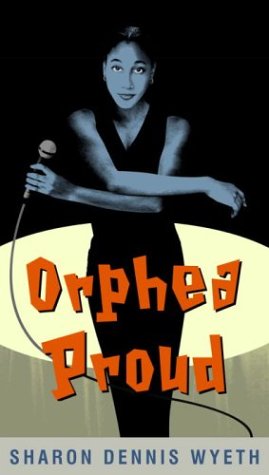 Orphea Proud tells her "love story" as a performance piece, also sprinkling some poetry into the mix. She talks about losing her preacher father at age seven, the death of her mother the following year, and about being raised by her strict half-brother and his wife. At age 10, she meets Lissa, and they become best friends. But years later Orphea feels "panic" as she realizes she is in love with Lissa. When her brother, Rupert, catches the 16-year-olds in bed, he beats Orphea, and Lissa, hurriedly driving away in the snow, crashes and dies. There is a lot of tragedy for readers to swallow, and the preacher and Rupert seem too stereotypically cruel to be credible. But the performance angle keeps the pace brisk, even though some of the material seems more expository than would be plausible before a live audience (as would its length). After Lissa's death, Orphea has a breakdown, and her brother ships her to her mother's aunts in remote Virginia. The two elderly women seem overly familiar, but they add some warmth and much-needed tolerance to the story, assuring Orphea that "you're family, honey child" even after she tells them she is gay. Wyeth ( ) brings the story to life with tactile details, such as the "wood smoke mixed with snow clouds" smell of the aunts' store on Proud Road. All in all, a tender, if not always believable, novel. Ages 14-up.