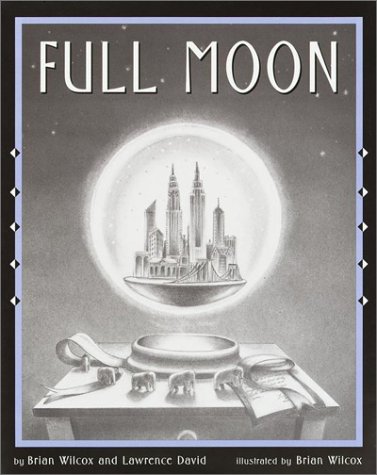 For Wilcox's first outing, a picture book done entirely in pencil, he teams with David (), and the adventure unfolds on a big stage. A boy receives a magic globe from his grandmother as a birthday gift, and Wilcox visually suggests its transformation into the moon in the sky; he then asks the moon to carry him to his grandmother. He drifts through surreal landscapes in which his toys, now large as life, zip and zoom past St. Patrick's Cathedral and through Central Park, gradually revealing Grandma's home as Manhattan. A series of unanswered questions (" 'You're almost there,' a man told me. 'Almost where?' I asked. But the moon lifted me away before I got an answer") hint at a surprise birthday party on top of the Statue of Liberty and a reunion with Grandma. The spreads of nighttime New York teem with life—tightrope artists teeter high above the streets, water towers launch off rooftops, the public library's lions yawn and stretch—but, unfortunately, the details, all in shades of gray, sometimes appear muddied. The nameless narrator seems a little indistinct, too. The city itself is the real star of the story, and Wilcox successfully brings its grandeur and allure to life. All ages.