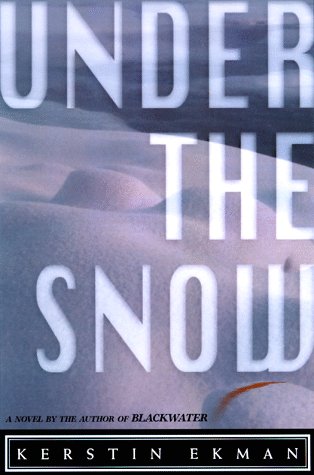 Under the Snow: A Novel by the Author of Blackwater

Readers of Swedish writer Ekman's highly praised 1996 thriller, Blackwater, will be pleased to find this first English translation of another of her outstanding psychological novels. Written in 1961, this taut and atmospheric narrative is set in Rakisjokk--a village inhabited mostly by the indigenous Sami and so remote that in winter it's accessible only on skis. On a lightless winter day, dour, overweight Constable Torsson comes from a nearby town to investigate the death of moody Swedish art teacher Matti Olsson. The villagers claim that Matti's death was accidental; following a fractious mah-jongg game, they say, a drunken, depressed Matti wandered out into the snow and froze to death. Though Torsson doesn't believe he's heard the full truth (particularly after he finds a blood-speckled mah-jongg tile in Matti's classroom), he apathetically accepts the villager's explanations. Then, six months later, David Malm, an art-school buddy of Matti's who's unaware of his death, impulsively decides to visit his friend. On the way, he encounters Rakisjokk's beautiful schoolteacher, Anna Ryd, and finds not only that she is apparently fleeing town but also that she has a knapsack that holds a noose with tangles of human hair. David confronts Torsson and challenges him to reopen the investigation. For his part, Torsson's curiosity and wish to prove himself are stirred by the presence of the wisecracking, arrogant David. The young man's crafty intelligence and Torsson's knowledge of Sami culture--not to mention his latent perceptiveness about human motivation--help the duo to uncover the reasons for the villagers' defensive evasions of the truth. The denouement is a shocker, though some readers may consider it too neat. Ekman is adept at sketching the complex forces that bind the residents of a small town in an inhospitable place. Compelling descriptions of landscape, climate and both Swedish and Sami culture add fascinating background. But Ekman's skill at understated characterization is the quality that lifts her novels out of the genre and into universal resonance. Here, she movingly portrays the unlikely partnership--and subtle moral growth--of two flawed men. (Jan.) FYI: Another early Ekman novel, Witches' Rings, was reviewed in Forecasts, Nov. 10.
close
Details