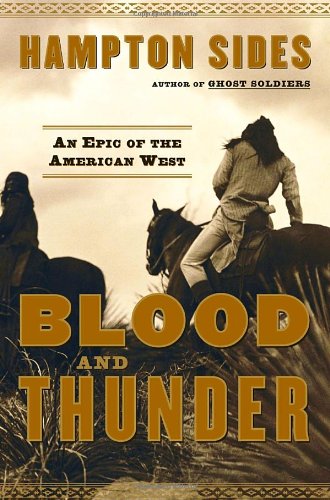 Blood and Thunder: An Epic of the American West

Although delivering little in the way of new information, Sides, an magazine editor-at-large and bestselling author ( ), eloquently paints the landscape and history of the 19th-century Southwest, combining Larry McMurtry's lyricism with the historian's attachment to facts. Inevitably, Sides's main focus is the virtual decimation of the Navajo nation from the 1820s to the late 1860s. Sides depicts the complex role of whites in the subjugation of the Navajos through his portrait of Kit Carson—an illiterate trapper, soldier and scout who knew the Native Americans intimately, married two of them and, without blinking, participated in the Indians' slaughter. Books about Carson have been numerous, but Sides is better than most Carson biographers in setting his exploits against a larger backdrop: the unstoppable idea of manifest destiny. Of course, as counterpoint to the progress of Carson and other whites, Sides details the fierce but doomed defense mounted by the Navajos over long decades. This culminated in their final, desperate "stand" during 1863 at Canyon de Chelly, more than a decade after a contingent of federal troops—operating under a commander whose last name of "Washington" seems ironic in this context—killed their great leader, Narbona.