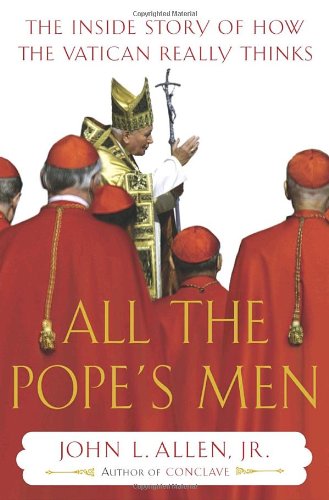 ALL THE POPE'S MEN: The Inside Story of How the Vatican Really Works

Allen, the Vatican correspondent for the and analyst for CNN and National Public Radio, offers an authoritative guide to the church's inner workings. Far from sensationalistic, this book provides a carefully balanced view of how the Catholic Church works—and sometimes doesn't—in the modern world. Allen, who is Catholic himself but does not see himself as a missionary or apologist for the church, is a fair and thorough reporter of ecclesial affairs who drew on four-plus years of covering the Vatican as well as 35 interviews with officials in the church bureaucracy to write this book. He begins with an overview of the Vatican, then debunks five myths—including, notably, the idea that power is concentrated solely in the Pope and that the Vatican is fantastically wealthy. In talking about the myth and reality of Vatican secrecy, Allen lays out the basis for his book: that the Vatican's psychology and culture are difficult for people, even most Catholics, to grasp, resulting in miscommunication and animosity toward the church. Allen also delves into Vatican psychology, sociology and theology before concluding with lengthy chronologies detailing the Vatican's role in the American sexual abuse crisis and the war in Iraq.