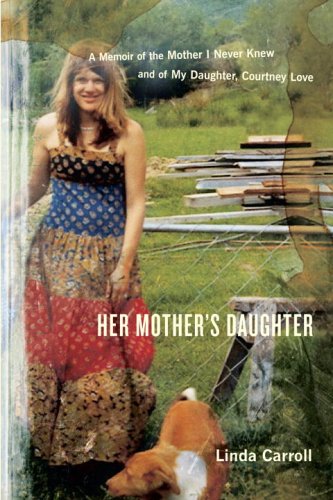 Her Mother's Daughter: A Memoir of the Mother I Never Knew and of My Daughter, Courtney Love

Carroll, a writer and therapist, bore quite a cross in rearing her fiery, unstable daughter, the rock icon who sets this memoir in motion by trumpeting her pregnancy. Fearing a "curse of the firstborn daughter," Carroll is seized with the urge to seek her own biological mother and mend a tattered matrilineal line. She discloses her past with a sprawling account of Catholic schools, friendships, romances and pregnancies in 1960s San Francisco, in prose mired with detail but often wry and touching. Carroll's social-climbing adoptive parents seem at best ambivalent, at worst cruel. In 1993, after Courtney's rise to fame and stormy estrangement from Carroll, the author finds her biological mother: Paula Fox, the acclaimed children's author who became pregnant as an abandoned teen. The two are kindred spirits, and it's a heartwarming twist that the act of writing, on many levels, becomes Carroll's portal to her past. The promise of dish on Courtney and the emotional reunion with Paula—along with Carroll's tender wit and poignant honesty (Courtney's siblings saw her "as glamorous, but with sharp claws and teeth")—will keep readers soldiering through this often exhaustive history.