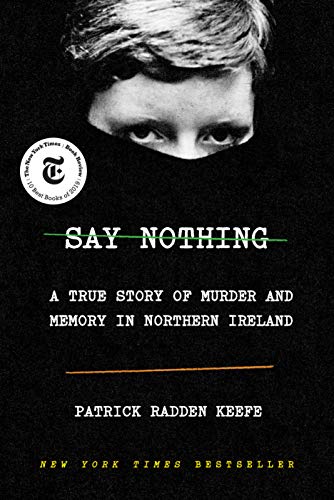 Say Nothing: A True Story of Murder and Memory in Northern Ireland

New Yorker staff writer Keefe (Snakehead) incorporates a real-life whodunit into a moving, accessible account of the violence that has afflicted Northern Ireland. The mystery concerns Jean McConville, a widowed mother of 10, who was snatched from her Belfast home by an IRA gang in 1972. While Keefe touches on historical antecedents, his real starting point is the 1960s, when advocates of a unified Ireland attempted to emulate the nonviolent methods of the American civil rights movement. The path from peaceful protests to terrorist bombings is framed by the story of Dolours Price, who became involved as a teenager and went on to become a central figure in the IRA. While formal charges were never brought against republican leader Gerry Adams in McConville’s murder, Keefe makes a persuasive case that McConville was killed at his order for being an informer to the British—and the author’s dogged detective work enables him to plausibly name those who literally pulled the trigger. Tinged with immense sadness, this work never loses sight of the humanity of even those who committed horrible acts in support of what they believed in. A[em]gent: Tina Bennett, WME. (Feb.) [/em]

Due to a production error, this review was not starred when originally published, though it should have been.