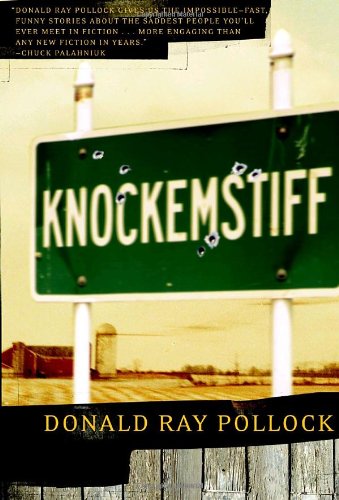 A native of Knockemstiff, Ohio, Pollock delivers poignant and raunchy accounts of his hometown's sad and stagnant residents in his debut story collection that may remind readers of its thematic grand-daddy, . The works span 50 years of violence, failure, lust and depravity, featuring characters like Jake, an abandoned hermit who dodges the draft during WWII, lives in a bus and discovers two young siblings committing incest on the bank of a creek, and Bobby, a recovering alcoholic who must face the imminent death of his abusive father. The language and imagery of the novel are shockingly direct in detailing the pitiful lives of drug abusers, perverts and a forgotten population that just isn't “much welcome nowhere in the world.” Many of the characters appear in more than one story, providing a gritty depth to the whole, but the character that stands out the most is the town, as dismal and hopeless as the locals. Pollock is intimate with the grimy aspects of a small town (especially one named after a fistfight) full of poor, uneducated people without futures or knowledge of any other way to live. The most startling thing about these stories is they have an aura of truth.