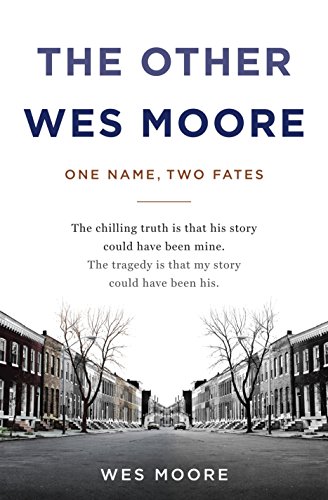 The Other Wes Moore: One Name and Two Fates—A Story of Tragedy and Hope

Two hauntingly similar boys take starkly different paths in this searing tale of the ghetto. Moore, an investment banker, Rhodes scholar, and former aide to Condoleezza Rice, was intrigued when he learned that another Wes Moore, his age and from the same area of Greater Baltimore, was wanted for killing a cop. Meeting his double and delving into his life reveals deeper likenesses: raised in fatherless families and poor black neighborhoods, both felt the lure of the money and status to be gained from dealing drugs. That the author resisted the criminal underworld while the other Wes drifted into it is chalked up less to character than to the influence of relatives, mentors, and expectations that pushed against his own delinquent impulses, to the point of exiling him to military school. Moore writes with subtlety and insight about the plight of ghetto youth, viewing it from inside and out; he probes beneath the pathologies to reveal the pressures—poverty, a lack of prospects, the need to respond to violence with greater violence—that propelled the other Wes to his doom. The result is a moving exploration of roads not taken.