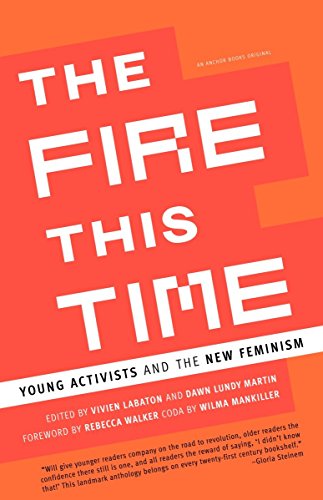 THE FIRE THIS TIME: Young Activists and the New Feminism

In the '90s, the question on cultural critics' minds, not to mention the cover of , was "is feminism dead?" But before any reporter considers writing an obituary, he or she should consult Labaton and Lundy Martin's inspiring book. It proves that the movement's invisibility to mainstream media is a sign not of demise but of strength. The "third wave" (i.e., this younger, more colorful incarnation of feminism) is operating on a level that doesn't fit nicely into sound bites and commercial pop songs. Labaton and Lundy Martin's eloquent and powerful collection of writings from third wavers demonstrates that, above all, the new feminism is multi-issue. This generation isn't content with seeking reproductive freedom or workplace equality; its members want to tear down the prison-industrial complex, heal the wounds of Puerto Ricans in Vieques and take on misogynist rappers. And that's just the beginning. These contributors use personal stories—like Jennifer Bleyer's account of pining for girl zines in suburban isolation—without dissolving into self-obsession. Seasoned writers and hopeful activists dexterously handle such cultural and political issues as the new hip-hop theater, technology, globalization and the law. And where the text gets thick, it is a legitimate heft; these issues are heavy and too often neglected. Labaton and Lundy Martin don't claim omnipotence: "instead of presenting our readers with our singular vision of what we think the future of feminism is, we present multiple (and sometimes opposing) voices that together constitute a new feminist possibility." This hopeful, fresh collection proves that feminism is very much alive and kicking.