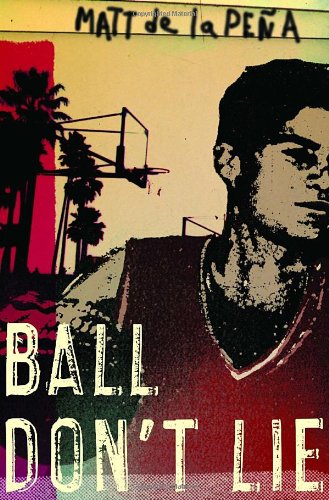 De la Peña recounts one eventful day in the life of basketball phenom Sticky Reichard, 17, with flashbacks that fill in his horrific childhood. Since age seven, Sticky's ricocheted between group and foster homes before settling in Venice Beach, Calif. Along the way, he picked up a passion for basketball, and his obsessive-compulsive habits enhance his game—he practices constantly. Despite a demonstrated lack of interest in school (a freshman-year report card contains "five Fs and a C in PE"), a college scholarship is on the horizon, and so is a healthy relationship with "super-pretty Vietnamese girl," Anh-thu. But can Sticky overcome his past—the cigarette-burn scars from his mother's pimp, his mother's violent death, the succession of indifferent caretakers? The group home director tells him he's "a good person," but Sticky's morals allow for compulsive shoplifting, and he celebrates a big win with mindless vandalism that lands him in jail. It's easy to feel sorry for him but he's tough to like. The author's depiction of the foster care system seems over-the-top (the first would-be parent dies of cancer, the next doesn't even provide a bed, a third catches his daughter with Sticky unclothed). Still, readers will find the portrait of this obsessive-compulsive's rituals both on and off the court fascinating. The prose moves with the rhythm of a bouncing basketball and those who don't mind mixing their sports stories with some true grit may find themselves hypnotized by Sticky's grim saga. Ages 14-up.