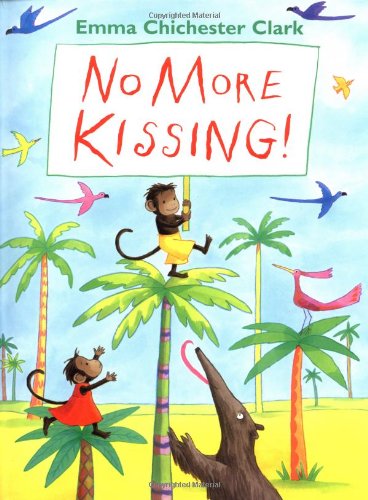 Despite the title, there's plenty of kissing in Clark's () cheery monkey tale. "Why does there have to be so much kissing?" asks Momo. "It goes on everywhere." From his vantage point high in a jungle tree, he can see that boars do it, butterflies do it, even airborne storks do it. Clark's sweet-tempered watercolors (her star looks vaguely reminiscent of H.A. Rey's famous chimp), offer a plethora of carefree families kissing goodnight, kissing to make up and, especially, kissing babies, who "get more kisses than anyone." Momo's first-person narration will resonate with any child who has had his or her fill of unwanted affection. The poker-faced text plays well against the illustrations, as in a spread in which the monkey declares, "And I wish no one would kiss me, especially... people I don't KNOW!" while being pursued by an aardvark, boar and rhino. In the end, Momo, too, falls prey to his irresistible new baby brother and, "by mistake I think, I kissed him." Clark's narrative never falters as Momo remains true to his nature to the very end ("It was lucky no one was looking," he says—but of course, everyone ). Though it begins as an anti-Valentine, this volume will strike an affectionate chord with curmudgeons and romantics alike. Ages 2-5.