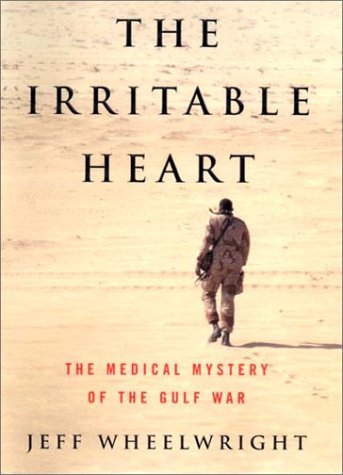 The Irritable Heart: The Medical Mystery of the Gulf War

Gulf War syndrome is a vague diagnosis for such symptoms as diarrhea, headaches, muscle pain, fatigue, shortness of breath and irregular heart rhythm (the eponymous ""irritable heart""). Causes of the syndrome have been variously cited as exposure to chemical weapons, nerve gas and fuel oil fumes, but, as Wheelwright explains, the same symptoms could also be the result of chronic fatigue syndrome, multiple chemical sensitivity or fybromyalgia. Wheelwright, former science editor of Life magazine and author of Degrees of Disaster, gathers epidemiological evidence and personal histories to argue that modern medicine lacks the wisdom and skills to understand Gulf War syndrome because medical experts look at physical symptoms separately from emotional symptoms. For example, when Carol Best returned from the war, she began to experience, among other symptoms, frequent asthma attacks that were similar to those brought on before the war by her exposure to chemicals in the printing shop where she had worked. Best wonders if her stint in the Gulf is responsible for her poor health, but, argues the author, she never considers that going through a divorce could be a possible contributing factor, and, in the end, the doctors are unable to pinpoint the source of her illness. Wheelwright assumes a self-conscious and patronizing posture (""I have an agenda for Carol, and I must push ahead with it""), but his argument that modern medicine must adopt a more holistic approach as it confronts new medical mysteries is a clarion call to medical professionals and laypersons concerned about the state of health in contemporary society. (Jan.)
close
Details