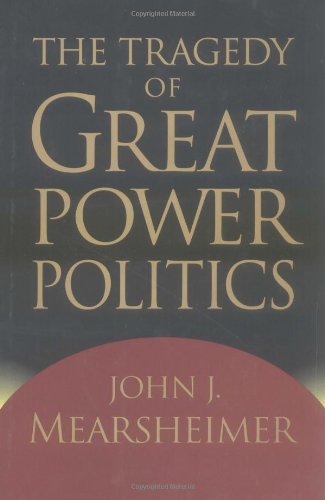 THE TRAGEDY OF GREAT POWER POLITICS

The central tenet of the political theory called "offensive realism" is that each state seeks to ensure its survival by maximizing its share of world power. Mearsheimer, professor of political science at the University of Chicago, sets out to explain, defend and validate offensive realism as the only theory to account for how states actually behave. He proceeds by laying out the theory and its assumptions, then extensively tests the theory against the historical record since the Age of Napoleon. He finds plenty of evidence of what the theory predicts—that states seek regional dominance through military strength. Further, whenever a condition of "unbalanced multipolarity" exists (i.e., when three or more states compete in a region, and one of them has the potential to dominate the others), the likelihood of war rises dramatically. If history validates offensive realism, then the theory should yield predictions about the future of world politics and the chances of renewed global conflict. Here Mearsheimer ventures into controversial terrain. Far from seeing the end of the Cold War as ushering in an age of peace and cooperation, the author believes the next 20 years have a high potential for war. China emerges as the most destabilizing force, and the author urges the U.S. to do all it can to retard China's economic growth. Since offensive realism is an academic movement, readers will expect some jargon ("buckpassing," "hegemon"), but the terms are defined and the language is accessible. This book will appeal to all devotees of political science, and especially to partisans of the "tough-minded" (in William James's sense) approach to history. Maps.