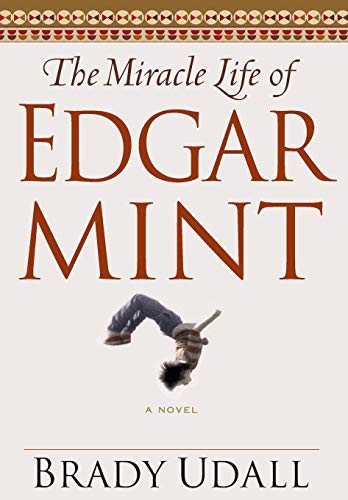 THE MIRACLE LIFE OF EDGAR MINT

Reminiscent of another debut—Ken Kesey's —this powerful first novel by short story writer Udall () is constructed around grotesque set pieces; black humor drives the plot. Set in the late '60s, Udall's story begins when seven-year-old Edgar Mint, the half-Apache, half-white narrator, is run over by the mailman's car, his head crushed. Abandoned by his grandmother and alcoholic mother after his remarkable recovery, the boy begins an odyssey through various institutions and homes, starting with St. Divine's hospital in Globe, Ariz., where he recuperates, through Willie Sherman's, a horrific school for Indian children, ending up placed with a dysfunctional Mormon family in Richland, Utah. The novel's long middle section, describing Edgar's brutalization at the Indian school by the other kids, captures the effect of what seems like endless bullying on a child's consciousness. Against this hostility, Edgar concocts a homemade magic, which consists mainly of typing on a clunky Hermes typewriter given to him by a fellow St. Divine's patient, Art Crozier, a middle-aged man who has lost his family in a car wreck. One of Udall's best touches is to make the doctor who saved Edgar, Barry Pinkley, into a mysterious and menacing figure, perpetually lurking on the sidelines, rather like Clare Quilty in . While Pinkley strives maniacally to be Edgar's guardian angel, the boy views him with ambivalent loathing. When Pinkley, disguised as a Mormon missionary, seduces Lana Madsen, the wife in the Mormon family that takes Edgar in, he sets off the final catastrophe in the boy's life. Udall's style is reminiscent of the '60s black humorists, but he doesn't share their easy cruelty or inveterate superciliousness, making this not only an accomplished novel, but a wise one.