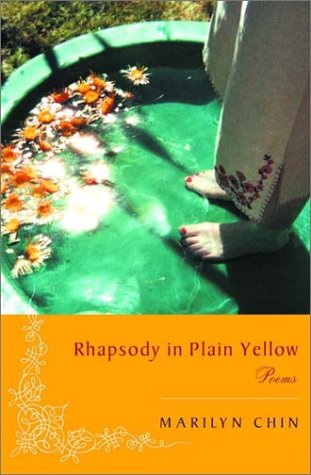 Chin's concerns for heritage and descent, matched with confrontational rhetoric, seem to make her an old-school poet of Asian-American identity, while a liberal use of autobiographical material (her grandmother, her parents, her neighborhood, her lovers, her English department) positions her speaker as a representative witness to modern, multicultural, middle-class California. This third collection's jagged rhythms and fragmented forms, some based on Chinese poetry and music, others derived from blues and Persian ghazals, thus seem a small-scale syncretism of the personal and political. Chin can tear at familial wounds even while expressing dismay at the limits of tradition: "I, my mother's aging girl/ Myopic, goat-footed// Got snagged on an unmarked trail/ The road diverged; I took/ The one less traveled/ Blah, blah// I sit at her grave for hours...." In other elegies for her mother, and in the at times erotic title poem, Chin approaches the sinewy strength of Adrienne Rich. "Poetry is a vast orphanage in which you and I are stars," "Broken Chord Sequence" says; "One robe, one bowl, silent pilgrimage, the river filled with martyrs." One poem proclaims "The Colonial Language is English"; others promise musical idyll ("Summer Sonatina") or allegory ("The True Story of Mortar and Pestle"). Chin's ambitions can outrun her technique: some poems, especially those in short lines, lack aural or emotional power. Overall, though, this collection's speaker has a strong sense of herself and of her times—a sense to which readers of many concerns could respond.