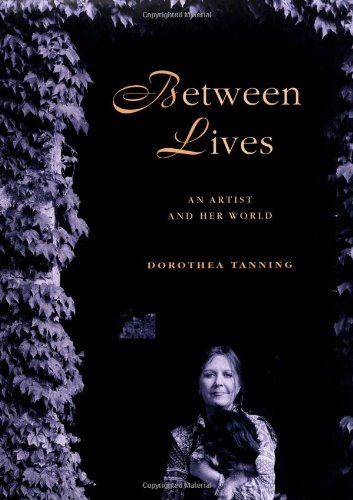 BETWEEN LIVES: An Artist and Her World

A noted American artist born in Galesburg, Ill., Tanning lived in a milieu of European creativity as wife of the surrealist painter Max Ernst (1888–1976). Now in her 90s, she has expanded a previous memoir () to offer a fuller reminiscence. She is self-effacing, finding Ernst's life and story more interesting than her own, but describes their shared life poetically: "Yes, I think I was his house. He lived in me, he decorated me, he watched over me." While there are glimpses of other creative talents, like the composer-critic Virgil Thomson, who snoozed next to Tanning while supposedly reviewing a concert, Tanning is best on artists, like the oddball genius Joseph Cornell: " a modern Dante, with his deep religious feeling and physical abstinence. Consummate romantic in an intoxicatingly worldly world, he came frequently to town as from some remote monastic commune." Fans of name-dropping will melt at her wedding with Ernst, a double marriage with Mr. and Mrs. Man Ray, with Stravinsky offering the wedding toast. More noteworthy is Tanning's ready wit, as in the story of a French neighbor's cat who would wait till his master arrived home, then "jumps up on the table and urinates in his soup." Surviving the devastating loss of Ernst, she concludes: "By evening the pall has lifted. Everything waits, radiant. Life is okay." Few surrealists or those close to them would have such a sunny world view, but this vigorous optimism is part of Tanning's real charm, not to mention her ever-improving art and poetry, both of which arrived at a new level of achievement when she was already a senior citizen. Modern art lovers of multiple generations will want this book, as will universities with larger art history collections.