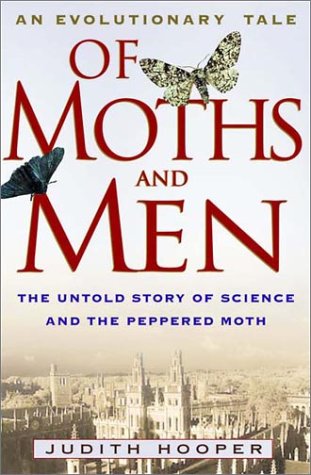 OF MOTHS AND MEN: The Untold Story of Science and the Peppered Moth

Journalist Hooper offers an engaging account of H.B.D. Kettlewell's famous field experiments on the peppered moth, which were widely known as "Darwin's missing evidence," proof of natural selection in action—until 1998, that is, when biologist Michael Majerus showed Kettlewell's findings to be falsified and wrong. Hooper peers into the lives of Kettlewell and his mentor and eventual adversary, the imperious and brilliant E.B. Ford, revealing the human factors that don't get written into the research papers—"recriminations, intrigue, jealousy, back-stabbing and shattered dreams." Ford, a Darwinian zealot hell-bent on proving natural selection, serves as a foil for the broader questions raised here about dogmatism in science. Natural selection had the dubious distinction of being as widely accepted as it was short on evidence, and the moth experiments were greeted as a pivotal victory; indeed, despite evidence to the contrary, many scientists today still embrace Kettlewell's findings, in part because denying them opens the door to "the bogeyman of creationism." As Hooper writes, the peppered moths provided "a damned good story, a narrative so satisfying, so seductive, that no one can bear to let it go. But a story alone is no substitute for truth." Hooper's lively history also traces the extinction of old-school natural history, embodied by Kettlewell, who was very much left behind with the synthesis of Darwinism and Mendelian genetics, and who died a suicide. (.)