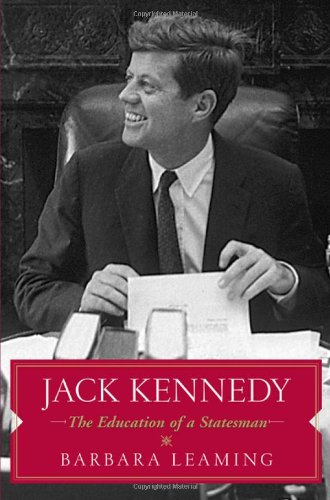 Jack Kennedy: The Education of a Statesman

Hollywood chronicler Leaming ( ; ) overreaches and overstates in her first attempt at political biography. Leaming endeavors to show how JFK's WWII-era relationships with British aristocrats (such as his doomed brother-in-law, Billy Hartington, heir to the duke of Devonshire), together with extensive readings in British political history and an idealization of Churchill, formed the mature Kennedy's brinkmanship approach to the Cold War. Leaming fails to point out that President Kennedy's modus operandi with regard to the Soviets followed precedent established by Truman and Eisenhower, and that JFK was often a junior partner in policies articulated by such NATO leaders as British Prime Minister Harold Macmillan—all of them, of course, influenced to some extent by Churchill, who had first articulated the concept of an iron curtain. That Kennedy idealized and romanticized the British aristocracy is true. That this idealization had a great impact on his presidential philosophy regarding foreign policy is somewhat less so. In fact, America's longstanding cultural, emotional and ethical alliance with Britain, and the need to play hardball in the face of early 1960s Soviet aggression, would have gone a long way toward defining JFK's tactics in international relations even had he not visited England as a young man.