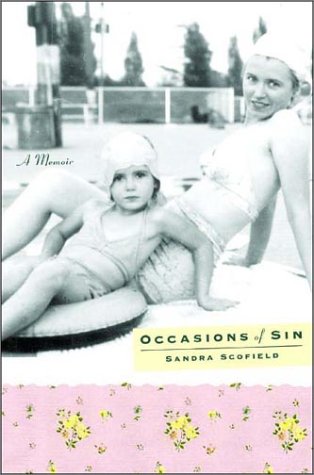 OCCASIONS OF SIN: A Memoir

Scofield's account of her childhood and teenage years will ring familiar with many readers. Although the book is framed by a specific time (the 1950s and '60s) and place (West Texas), its themes—of wanting to be a perfect daughter, of trying to grasp the concepts of religion and God as a child, of fitting in among peers who seem far more mature—are universal. Scofield's mother, Edith, lived a difficult life. A striking beauty, she had political ambitions yet was held back by a disapproving mother, two understandably needy young daughters and an often-absent husband. Edith, formerly Methodist, converted to Roman Catholicism when Scofield was a child, and brought Scofield and her sister up in the church. Much of Scofield's memoir concerns her years at Catholic boarding school, where she tried to find a balance between having an intimate relationship with God and fearing the iron-fisted nuns who monitored her every movement and prohibited contact with Scofield's adored—and non-Catholic—grandmother. Unlike many memoirists who write of growing up Catholic, novelist Scofield ( ; ; etc.) does not take a lighthearted look at her tumultuous childhood; rather, she marks her memories with an intense, reverent seriousness. When Scofield returned home at age 15 to live with Edith, the mother she'd idolized practically since birth, she was devastated to find her showing signs of grave illness, which turned out to be chronic nephritis, a kidney disease (she died a year later). Poignant and clearly cathartic, this is a tender, melancholic coming-of-age story.