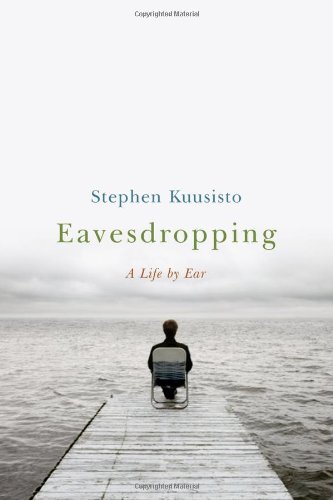 Eavesdropping: A Life by Ear

Most of us see the layers of space, but Kuusisto, who has been legally blind since birth, hears them. In these vivid essays, the poet ( ) and memoirist ( ) indulges and investigates the active listening he deploys to navigate the world around him. He is a keen observer. A crowd is not a crowd to him; instead it is a series of sound points, indicating space, pace, rhythm and mood. The wind is just as complex, as it "carries fragments of noise from far places like an absentminded uncle who doesn't remember what's in his old suitcase." Music is a constant companion, starting with trees tapping on windows, birds calling and his discovery of a Victrola in his grandmother's dusty attic. At times, he lists sounds to guide the reader through his interpretation of a scene, as when he comes upon "four hundred drunken men pushing and cursing" in an airport in Tallinn, Estonia, their boots making the "metaphysical noise called 'the edge of night.' " Through all these sounds and their meaning to him, Kuusisto reveals the nuance of the heard world, transporting the reader as he maps the aural landscape.