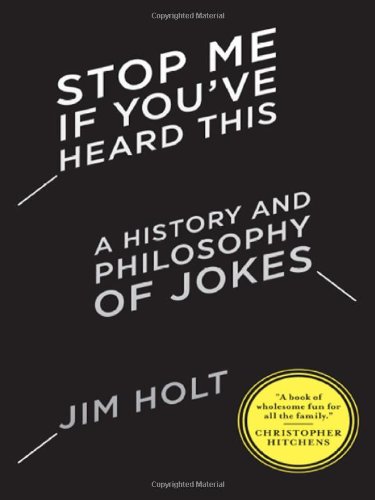 Stop Me if You've Heard This: A History and Philosophy of Jokes

A complete history of the joke and its philosophical motivations will perhaps never be written, as Holt admits that “the joke is not an unchanging Platonic Ideal, but a historical form that evolves over time.” Holt, a contributor to the , tries anyway, tracking the joke's evolution from the oldest surviving joke book, the surprisingly blue Greek text Philogelos, to Freud and Kant in explaining how and why we laugh at jokes. The book's second half occasionally lapses into dryness; even Holt suggests that the more interesting a subject is, the more boring the accompanying philosophy. In examining two overlooked aspects of a common joke, Holt presents some illuminating thoughts—jokes evolve more than they are created; they are an ideal way to expel pent-up aggression—and fascinating fringe figures such as Gershon Legman, the controversial and pioneering dirty-joke archivist who saw himself as “the keeper of the deepest subcellar in the burning Alexandria Library of the age; the subcellar of our secret desires, which no one else was raising so much as a finger to preserve.” Highly readable, Holt's effort will appeal to the intellectually curious, and the jokes are pretty funny.