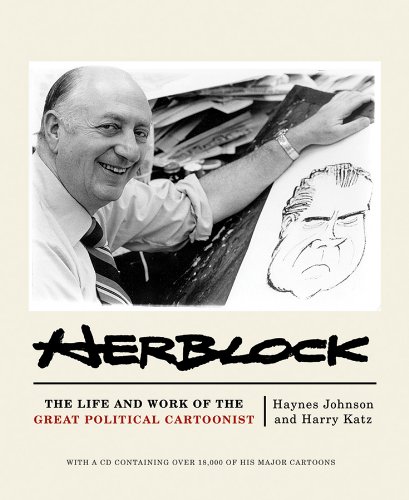 The diminishing profession of editorial cartooning has been a particularly doleful canary foretelling the decline of the daily newspaper format. In this context, this retrospective of the late cartoonist's work defiantly documents the extraordinary career of a daily visual commentator on American political life. Designed to accompany an exhibit at the Library of Congress, the book briefly outlines the artist's career and its historical context, starting with Herbert Block's early career during FDR's term. His first Pulitzer, in 1941, earned him independence when he came under editorial fire for advocating U.S. entry into WWII. After his own military service, he joined the , an association that lasted until his death in 2001. The bulk of the book showcases highlights of the artist's seven-decade career. Politically independent but largely progressive, Herblock is presented as prescient on issues including McCarthyism (a term he coined), civil rights and environmentalism. Herblock's best cartoons do more than provide color commentary on political skirmishes. They manifest characters vividly: his viciously ineffectual Eisenhower brandishes a feather opposite an ax-wielding McCarthy, for instance. The book is accompanied by a DVD containing 18,000 cartoons, a nearly complete collection of Herblock's indispensable oeuvre.