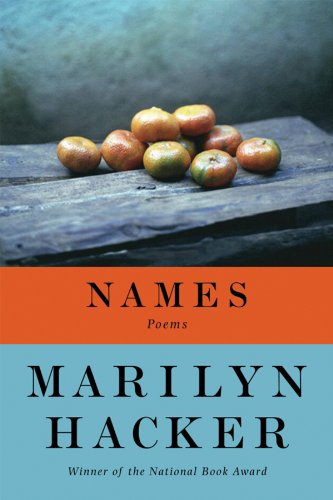 Hacker's virtuosic rhymes, syllabics and other traditional devices give discipline and elegance to her learned, yet direct, clear, personal, work: her daily life in Paris and New York, her affection for other writers, her lesbian identity and her left-wing politics find generous expression in this 12th book. Those who found her earlier work of the 1990s too casual could find real power here: reacting to violence in Iraq and in the Middle East, to America's sometimes baleful foreign policies, and contemplating the mortality of her friends, Hacker achieves a sometimes grim compression. “I tease out metaphors to link desire/ and stasis, coffee, shadows, lavender;/ in my name, sons and sisters die Elsewhere.” So she writes in an abbreviated crown of sonnets; a ghazal (one of 11, all composed according to strict older rules) rebukes the poet for “easy, dishonest verses./ Nothing protects your poetry from the love that kills.” Hacker has herself become an eminent translator (of Venus Khoury-Ghata and Claire Malroux, among many others); her attention to Francophone and Arabic writers, alongside and against her American Jewish heritage, helps give this collection its sometimes surprising force.