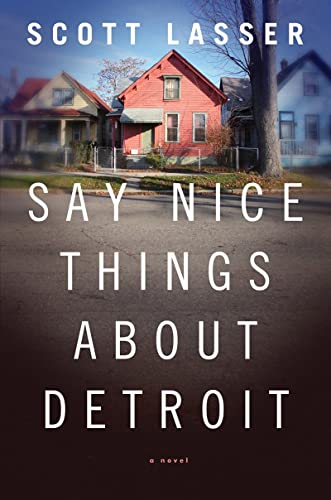 Detroit is autumnal in this quietly moving novel of place; the heyday, the riots, the collapse have already happened, and the city is sinking quietly. There is still tension, but behind it is a sense of emptiness and ending. David Halpert, returning to his native city in 2006 to care for his mother, who’s been diagnosed with dementia, is quickly reintroduced to this tension with the news that a white woman and a black man—David’s high school girlfriend Natalie and her half-brother Dirk, a retired FBI agent—possibly mistaken for an interracial couple, have been gunned down in Dirk’s Mercedes. Lasser shifts between 2006 and 1994 to explore how this happened, and to chronicle David’s return; his relationship with Natalie’s sister, Carolyn, and with his aging parents; the continuing impact on him of his son’s death years earlier; and to chart a growing connection between Dirk and a troubled young man named Marlon Booker. The complex divisions of Detroit are introduced obliquely and effectively through the characters—David most centrally, but also Dirk and Marlon, who Dirk feels responsible for saving. Lasser (The Year That Follows) composes his sympathetic cast into tableaux that are meaningful, even emblematic, but that, even when highly dramatic, aren’t forced. His restrained portrait of Detroit evokes real pathos. Agent: Jennifer Rudolph Walsh, WME Entertainment. (July)
close
Details