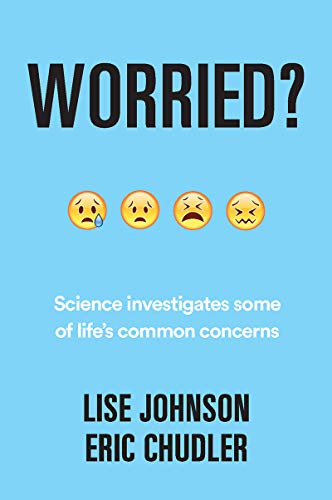 Biomedical engineer Johnson and neuroscientist Chudler, who previously cowrote Brain Bytes: Quick Answers to Quirky Questions About the Brain, team up again for a cleverly conceived and well-executed examination of a host of common sources of worry: foods, medicines, the environment, chemicals, animals, and travel. For each topic, they evaluate the danger’s preventability, consequences, and likelihood, combining the results on an easy-to-read grid divided into four categories: “don’t worry; unlikely and preventable,” “don’t worry; unpreventable but unlikely,” a fatalistic “don’t worry; likely but unpreventable,” and an unequivocal “worry about this.” The medical worries range from the common—the health risks of using acetaminophen and oral contraception—to the rare—brain-eating amoeba and Ebola. Similarly, the animals evaluated include both everyday pets such as dogs and exotic predators such as sharks. The authors’ selections also include, for food, caffeine, gluten, and salt; for environment, mobile phones and microwave ovens; and for travel, airport scanners and cruise ships. Their analyses are short but thorough, scientifically grounded with appropriate citations, and candid about when the science is still uncertain. Those already convinced that—to name three topics—fluoride, DEET, and GMOs are highly dangerous may balk at the contrary conclusions, but the open-minded will find a resource that is both useful and enjoyable. (Mar.)
close
Details