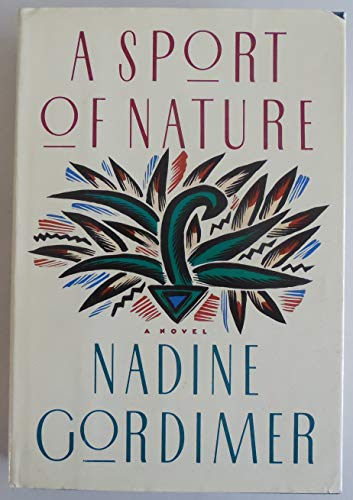 A Sport of Nature

This ninth novel (July's People, Burger's Daughter, The Conservationist, etc.) by Gordimer deals, as does most of her writing, with South Africa, her native land, with the emerging black leadership of surrounding states and with the ways in which human beings survive physically, emotionally and morally under, and struggle against, racism and injustice. Required reading for our era, it is a moving and powerful book that, in a career rich with distinguished works, could well be considered her masterpiece. The title comes from the translated Latin term for a plant or animal form that is unlike its parent stock, and applies equally to the protagonist, Hillela, a Jewish South African followed from adolescence into her 40s, and to South Africa itself. Abandoned early by her mother for a lover in Mozambique, Hillela lives for a time with her father in Rhodesia; is expelled from boarding school there and is shuttled between the households of two maternal aunts, until her burgeoning sexuality and an innocence of appropriate categories as to whom one may love, cast her out of the family circle. As she grows into womanhood, Hillela becomes an increasingly impressive personality, ever more closely linked to contemporary events. The strands that make up her life, as that life is reported, rumors and all, by an unnamed narrator, are woven into the larger tapestry that portrays South Africa over a span of more than a quarter of a century, from the late 1950s, when the government became increasingly oppressive, to the rise of black consciousness and militancy in succeeding decades and into the near future. Gordimer, who vividly conveys the impossibility of living decently under apartheid, clearly sympathizes with Sasha, Hillela's pro-revolutionary cousin, who writes, ""The mines and petrol bombs are planted by blacks, but it's the whites who have killed their own children.'' (April 27)
close
Details