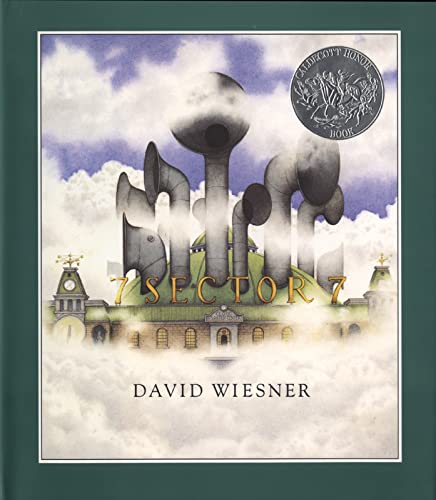 Caldecott Medalist Wiesner (Tuesday) again takes to the air, with watercolors that render words superfluous. Here, a boy on a class trip to the Empire State Building discovers that the landmark, enveloped by fog, is nonetheless a gateway to incredible vistas indeed. The boy is soon befriended by a jolly cloud that whisks him off to a sort of Grand Central in the sky, which functions as headquarters for clouds in the metro area--Sector 7. Giant tubes funnel the clouds in and out of a designated waiting area; boards overhead track arrivals and departures (e.g., ""Altocumulus"" Dep. 1:03, Tube 21W). Uniformed bureaucrats keep their eyes on the skies in various locations (Hoboken, Brooklyn, Manhattan, etc.) by means of TV-type monitors, and issue each departing cloud an architectural-type drawing with precisely delineated shapes and measurements to which it must conform. The complex is rendered with the hard edges and clear definition of ultra-realism, a style that serves as an effective foil for both the wispy clouds and the story's fantastical premise. Magnificent as the ""Cloud Dispatch Center"" is, it is only the beginning. For the boy, having discerned the clouds' dissatisfaction with their pedestrian assignments, alters the drawings and specs so that the clouds begin to transform into blowfish, angel fish and octopus shapes. Even after the unamused bureaucrats discover his creations and summarily return him by cloud taxi to his classmates, the boy's influence persists: an elaborate tropical-sea-in-the-sky astonishes his friends (and strangers on the street), draws fish to the surface of the river, and has the city's indoors cats pawing at their windowpanes in excitement. Starting from a simple, almost obvious idea--once one has thought of it--Wiesner offers up an ingenious world of nearly unlimited possibilities. His paintings, at once highly playful and purely pristine, contain such a wealth of details that they reveal new discoveries even after repeated examinations. The frame-within-a-frame that depicts the boy's first glimpse of the Sector 7 complex, for instance, is a mesmerizing study of the variegated colors and textures of clouds. The work as a whole is an inspired embodiment of what seems to be this artist's approach to story and vision: the more you look, the more there is to see. Ages 5-up. (Sept.)
close
Details