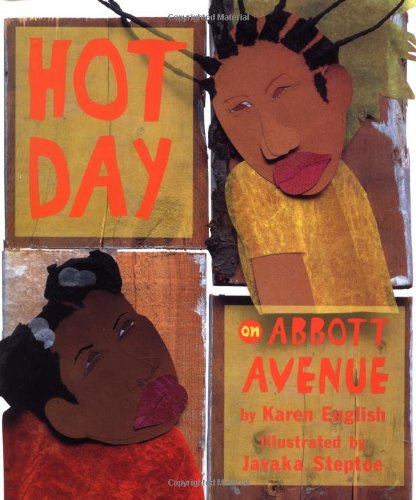 English's ( ) carefully cadenced narrative sets a scene that conveys the sluggishness of a sizzling day, when it's "too hot to even flutter a fan." The high temperature only fuels the tension between Kishi and Renée, who sneak peeks at each other but refuse to exchange words—"It's a best-friend-breakup day." The girls turn down neighbors' invitations to help do a crossword puzzle or weed a garden ("No working together on a never-speak-to-her-again-even-if-she-was-the-last-person-on-earth day"). Steptoe's ( ) collage renderings of the girls' simmering anger echoes a palpable sense of heat, with backgrounds overlaid in tissues of orange and red hues. His small, boxy panel compositions underscore a sense of the girls having backed themselves into a corner. Renée finally reveals to a neighbor (and simultaneously to Kishi) the root of the row: Kishi bought the last blue ice pop from the ice cream man even though she knows that is Renée's favorite. When a neighborhood game of double dutch lures the girls to a truce, Steptoe's illustrations burst into full-page and full-spread collages. English works into her narrative the former feuding friends' jump-rope chants, the words to which are playfully arranged to mimic the line of the rope. The denouement may be somewhat syrupy, but youngsters will be pleased to see the girls' hard feelings evaporate, turning the summer afternoon into "a feeling-good-about-being-best-friends-again day." Ages 5-8.