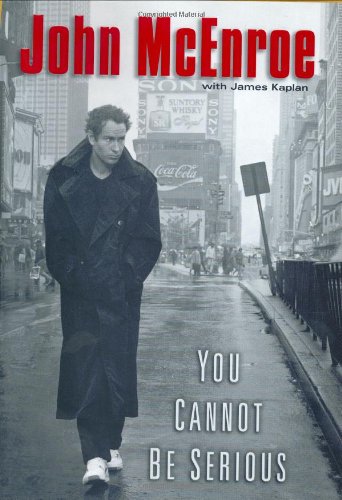 YOU CANNOT BE SERIOUS

In his new role as TV commentator (and in his short-lived run as Davis Cup captain) McEnroe has tried to make the unlikely switch from tennis enfant terrible to tennis elder statesman. Judging by the welcome he has received from both the cognoscenti and the American public, it has been a largely successful transition. This memoir of growing up (or not growing up) on the men's tour tracks the same course. Unfortunately, when shifted to the page, the reinvention produces a much more muddled result. All of the career highlights and lowlights are here—his idolization of Borg, his seminal matches with Connors and at Davis Cup, his clashes with the British press at Wimbledon, his romantic perambulations. But while appealingly self-aware ("For me, the relief of not losing has always been just as strong as, if not stronger than, the joy of winning") and consistently honorable, the effort feels a little dull. McEnroe's sincere pronouncements lack the that might have made the book entertaining, and yet for all his openness, he engages in too much self-justification to seem truly vulnerable or poignant. The book grew out of a profile Kaplan wrote for the two summers ago. That piece managed to present McEnroe as affable without diluting what is essentially brash and true about the star, and one wishes a little more of that boldness would have crept in here. For McEnroe, the persona hinted at in public remains more interesting and complicated than the person he gives us in this book. While the champion would no doubt argue, it appears that he has hit this one a little wide.