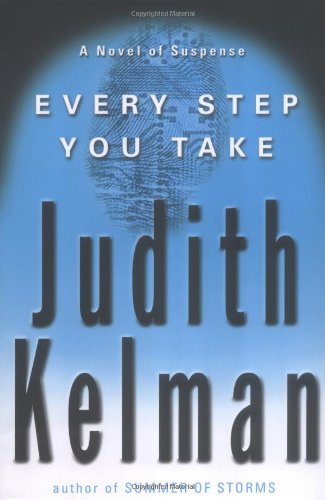 EVERY STEP YOU TAKE

Kelman (; ; etc.) saddles her protagonist, New York writer Claire Barrow, with a heap of problems in this knotty suspense thriller. Claire's police detective husband has committed suicide, leaving her to care for his rebellious teenage daughter; her money and her identity have been stolen; her mother is depressed; her beloved editor has disappeared, leaving her with a nasty new one who doesn't like her work; an old flame is becoming increasingly persistent; a street preacher rants outside her house night and day; and she's got a bad case of writer's block. Then her computer crashes and wipes out all her files. If this sounds like more than any character, real or fictional, should reasonably be expected to deal with, it is. And to top things off, the serial killer her husband fought to put behind bars, B.B. LeBeau, aka the Eel, has just been released from prison on a technicality. The Eel has somehow become the darling of an imbecilic press, and the police are inexplicably powerless to intervene as he begins hunting down everyone who had anything to do with his incarceration, including the unlucky Claire. Accompanying these woes is a gaggle of secondary characters whose primary purpose appears to be to get killed. It's almost as if Kelman feels she's lost control of her book, and thus uses Claire to voice her concerns: "A writer could get trapped in that murky twilight between her invention and herself." An implausible ending drives the last stake through the heart of an effort that fails to live up to Kelman's usual high standards.