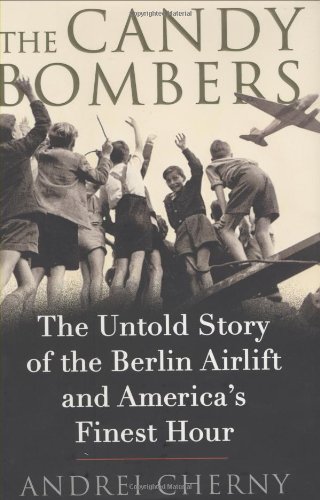 The Candy Bombers: The Untold Story of the Berlin Airlift and America's Finest Hour

In 1948, West Berliners were suffering and hungry, existing on food rations transported by trucks, trains and barges primarily by the occupying American forces. The Russians, trying to control the divided city, blockaded the transports on June 24, 1948, and American and British pilots risked their lives to airlift in 4.6 billion pounds of food and supplies until the blockade was lifted in May 1949. Pilot Hal Halvorsen won Berliners' hearts by secretly dropping his and his buddies' candy rations by parachute into the waiting hands of the city's children. In the process, says Cherny ( ), Berliners became devoted to democracy, and Washington foreign policy and military brass learned that the Cold War needed to be won not primarily with bullets but by appealing to hearts and minds. This book could have been cut by a third for better effect; Cherny's prose and his references to 9/11 are manipulative, and his subject, particularly the nuts and bolts of the airlift, will appeal primarily to WWII buffs, who should still find much to savor in this exhaustive, often absorbing and lucid account of America's successful standoff against the Soviets. 16 pages of b&w photos.