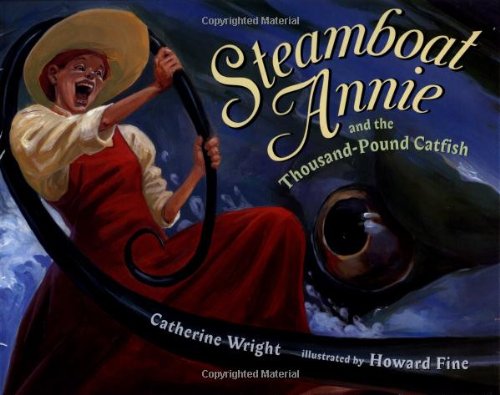 STEAMBOAT ANNIE AND THE THOUSAND-POUND CATFISH

According to newcomer Wright's 1,000-pound catfish character Ernie, Mayor Annie is an "uppity frog-kissin' steamboat captain" who should stay at home and "bake some cookies." But vivacious Annie has other ideas in this lively tall tale that features a heroine who can out-sing, out-talk and out-fish slimy, handsome villain Jefferson Jackson (who wants to be mayor) and his fishy friend. Catfish Ernie can't stand the constant singing of the citizens of Pleasant—even the town's lone cow sings solos at the church—so he decides to gobble not only the boats that journey down the Ohio River, but the town's church as well. With a colloquial style featuring plenty of outlandish exaggerations, Wright describes how Annie hooks Ernie and hangs on for a year and a half, all the while playing the calliope with her toes "so that folks would have dancing music." Fine's () energetic, acrylic paintings feature skewed perspectives, striking landscapes, eccentric portraits bursting from portholes, 19th-century characters whose red-cheeked faces and white teeth look carved from wood, and even a spectacular close-up of Steamboat Annie's bare foot. Although the exuberant plot at times grows unwieldy, and the feisty-feminist slant to the story seems a little heavy-handed, Wright's "fearsome fishing battle" brims with sly humor and enthusiasm. Ages 4-up.